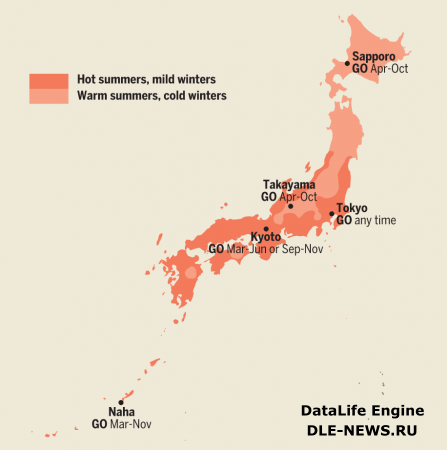 CURRENCY
» Yen (¥)
LANGUAGE
» Japanese
MONEY
» ATMs in post offices and some convenience stores accept foreign cards. Most hotels and department stores, but only some restaurants and ryokan, accept credit cards.
VISAS
» Visas are issued on arrival for most nationalities for stays of up to 90 days.
MOBILE PHONES
» Only 3G phones work in Japan. SIM cards are very hard to find. Mobile phone rental is common and easy.
TRANSPORT
» Brilliant public transport system: trains, buses, ferries and planes are all widely available and efficient.

SHOULDER (JUN & JUL, SEP–DEC)
» June and July is rainy season in most of Japan (except Hokkaidō) – it doesn’t rain every day but it can be pretty humid.
» Autumn (September to mid-December) is usually cool and clear.

LOW SEASON (JAN–MAR)
» Winter is cool or cold in most of Honshū, but it’s fine for travel.
» Be ready for snow in the mountains.